In a post in this morning’s Freakonomics section of the New York Times, authors Stephen Dunber and Steven Levitt pose the question, “Is Water Too Cheap?” Their post, based on economist David Zetland’s argument on California’s water problem, outlines a restructuring of water pricing that would “punish water guzzlers and encourage conservation.” 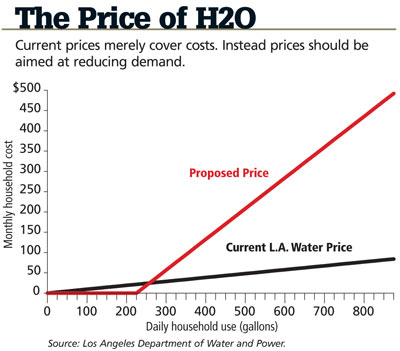 Okay, I see that. Instead of simply breaking even on water costs and creating an unmanageable water deficit; make municipal water a profit center and discourage users from over use.

Assessment: I think market manipulation like Zetland’s suggestion will just lead us down a detrimentally slippery slope. And that slope is covered with water and crude oil.

Let’s look at it this way.

According to the US Census Bureau, California’s population is hovering right around 36.5 million (just over 10% of the total US population) with a projected growth rate 7.6% annually. That works out to 12 million households consuming water and about 13 million in ’09. If we’re to pump the costs of water up by over 200% for 12 million households what do you think will result?

Sure, bottled water currently costs more than tap, but after a tap cost hike like the one Zetland is proposing; where will consumers turn for hydration on those hot California days? Pools, baths, dishes, cars and lawns aside; demand for ingested water would become such a commodity that bottle manufacturers – those non-biodegradable, crude oil thieves – would be swimming in a pool of Middle Eastern Saudi swill and ozone destruction.

But that’s just my opinion.

Of course there are efforts to move plastics to a “more green” production process, but how soon will that happen?

I’d love to get your spin on this. Do you think 10% of the U.S. population can be made to pay more for water – forcing them to look for other resources for consumable water? What kind of effect will that have on our National economy? Will it measurably affect the already skyrocketing crude oil costs? And globally, will it have an effect on the environment?

Let’s get this conversation boiling.

10 Minutes of TRUE Branding from the 2011 #140 Character Conference